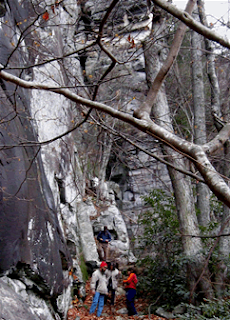 On the weekend before Thanksgiving, we had our inaugural hike of the completed section of the Hickory Nut Gorge Trail. We had just finished some new sections at Raven Rock and put up some new trail signs the week before. We were ready to show off our new creation.

It was a beautiful clear sunny day, cold and crisp. 19 people came out for the adventure. We carpooled up to Raven Rock to begin the hike. The Upper Raven Rock loop is a short hike, but with quite spectacular vistas. The trail goes to the very top of the cliff and looks out over the whole gorge. Scrambling over the giant boulders, the hikers made their way along the crest and then down along the trail under the base. From below, they could look up at the hundred foot high walls of vertical and overhanging granite. And this was just the beginning!

From here we retraced our steps, and then headed down on the Raven Rock Trail toward the lower Raven Rock cliff. The first part went through an old rhododendron forest creating a canopy of leaves and branches overhead. Then we came to the first challenge of the day – a steep descent down a rocky gully to the base of the cliff. The trail here was only partially completed with a few steps cut, but not all the way. I had warned the hikers to be prepared for this section, but everyone made it, sliding, scrambling, and clinging to branches all the way down. At the bottom, they were treated to more soaring cliffs, even taller than the ones above.

Glistening white walls and midnight black walls greeted us. We could even see the raven’s nest high up in the chimney corner in the middle of the cliff. On previous visits, the ravens had squawked at me, but today they were gone.

The scenery was so captivatingly beautiful that the group took about twice as long as I had estimated for this portion, so I threw away my planned schedule.

The next bit was easier, walking down a long woods road to the creek. At the water’s edge, we turned upstream and paralleled the stream for another half mile. This has always been my favorite part of the trail, different from the cliffs, but equally gorgeous. We started out near to the water and then climbed to a bluff over looking the rushing rapids below. While there were traces of some old roads, most of the trail was new footpath winding its way along the banks above and along the water’s edge. The trail passes so many waterfalls, I have never counted them all.

With daylight getting short, we decided to stop at the halfway point, and save the next two mile stretch for another day. We crossed the creek by rock-hopping at a big log, and then climbed up a steep bank to the cars. It was a great outing and everyone said how much they loved it and wanted to come back again.

By then we hope to get the trail in even better shape.

This site uses Akismet to reduce spam. Learn how your comment data is processed.